Absent yesterday Mr Phat as he had attended the temple around on the river here, the Heavenly Queen, on her designated day. It was $25 entry for lunch, four or more hundred present at the tables. (The charge was per person, not family.) With elderly parents Phat had attended alone. A bunch of incense cost $5, the sticks placed around the grounds. $10 was a respectable donation for the wishing tree. You wrote your wish on the slip of paper provided and hung it on the tree. As an old bachelor Phat might have wished for a good, pretty young wife perhaps, or some other kind of fortune. It was not the case. Phat had wished for peace. The man gave a circular motion from his corner seat beside the entry to the market—peace all round. At the proper introductions some weeks before Phat had said the pronunciation of his name was like Fuck you here.

During the course of the addas around at Faisal’s shortly afterward an enquiry after his brother Fausi in Vietnam brought no news. Faisal had nothing to report. In fact Fausi had not even told Faisal of his intended departure. The pair had been together on the Sunday, then without a word about it, Fausi flew out on the Monday. Disappointing. And more so taking a jaunt like that during Ramadan. During Ramadan one might go to Makkah, or visit family perhaps, Faisal explained. Not flit away for a pleasure trip. Faisal too had a fair idea of the kinda fun Fausi sought in Vietnam; no one needed to tell him. There were mosques in Vietnam where Fausi could pray, yes, Faisal knew that; but it was far from proper a trip like that. Fausi had been over to Vietnam a dozen times now; you couldn’t keep him away from the place. It did no good talking to him. At their age the relationship between the brothers was conducted as between friends; there was no question of precedence. (Faisal was the elder.) Even a father and mature age son spoke to each other as friends at that stage of life, Faisal explained. That was what was proposed in the Quran. Originally the brothers had operated Café d’Afrique jointly. After the renovations of the premises Fausi preferred to keep to the other place in Barkly Street, which was supposed to be a temporary locale.

Posted by pavle radonic at 3:50 AM No comments: 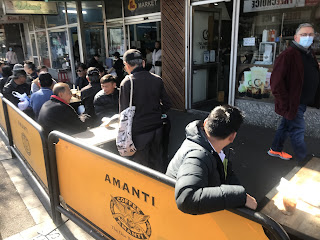 Survivors of the Vietnam War in Leeds Street. Around in Nicholson in the upper end of the mall it was the Bosnians & Serbs; the lower end the people from the Horn. The earlier extrusions were more undefined and dispersed; currently others awaited their turn. (In the larger urban centres the original inhabitants were nowhere to be found.)
Posted by pavle radonic at 4:46 AM No comments:

The Sport of Justice (and War)

The Victoria Cross SAS chap here pursuing defamation against media outlets has had some damning evidence presented against from a number of witnesses, with more challenged to appear. The fear of these incriminating themselves the current problem. One bound Afghan was allegedly kicked off a cliff by the decorated veteran and at least one other shot in the back of the head (also a bound prisoner).
A feast for the lawyers regardless.
“I can concede frankly,” Senior Counsel for the defendant addressing the Justice, “that it is possible for me to win this case without succeeding in proving the murder at Siah Chow, and it won’t shock Your Honour to learn that I hope to do so… But,” the man continues, “it is equally possible I could win this case by only proving the murder at Siah Chow. It is an independent path home to victory.”
The media organisations were “seeking to rely on a defence of truth.” Ultimately the law would triumph.
Legal fees for the prosecution were being funded by a patriotic oligarch here.
NB. A few days later the Australian High Commissioner to India was asked about the recent free trade agreement between the two countries, when India was continuing to refuse joining the condemnation of the Russians. That was no matter, the Commissioner answered. Friends could follow different sporting teams.
Posted by pavle radonic at 4:54 PM No comments:

Forgot to tell you. We gathered at the mosque two weeks before Ramadan or we call the event Nisfu Sya'ban night. We read Qur'an and after that, we asked forgiveness from the whole community. So that we enter Ramadan with clean hearts.
For me, it is interesting as I don't experience this occasion anywhere else even in Malaysia. Or probably I missed it.
I wish you can be here during Ramadan because you will hear Qur'an recitation from our mosques for almost 24 hours. School is closed and children will be in mosques for reading and learning Qur'an.
Still, I miss Ramadan in Jogja because I can do iftar in different mosques every day and they normally provide free iftar.
In my nearby mosques, there is no such a thing as free iftar. However, my neighbors bring and give snacks or drinks after performing the Tarawih prayer.
Posted by pavle radonic at 7:53 PM No comments:

Yeah, we do cleaning our street neighborhood, my grandma plants mung beans and peanuts. So that she will have less work in the farming field during Ramadan. I separate and clean recyclable waste my neighbors sold to me. Unfortunately no pictures I have taken.
New clothes? my grandma and I don't fancy new clothes for Eid. I think the last time I bought new clothes was in 2016. My cousin and her family do. Normally they will buy uniform clothes for the entire family. Probably one of my cousins will buy a new sarong for my grandma.
I have plenty of unworn clothes that were given by my friends back in Malaysia. So, I don't think I will buy a new one this time.
I am also planning to have my booster but it is still not available in my nearby hospital. I will wait.
Never heard Le Clezio before. I googled him. Seems a great writer to win a Noble Prize. Enjoy your reading.
NB. Since completing her degree in KL in 2019 Mahshushah has been living in her kampung on Madura Island, just above Bali. Long an intended destination of mine. Ramadan begins April 2.
Posted by pavle radonic at 5:18 PM No comments:

Just to note a piece of mine that has been recently published at Citron Review in the States.
Titled "Unfathomable," this one is based in my old neighbourhood down in Melbourne, near the mouth of our river and the bay.
Citron Rev is a poetry, micro & flash specialist. Back in April 2017 they published an earlier short set in Johor Bahru, Malaysia, titled " Wasted Kiss. "
Hope you find some interest, —750 words. Free access:
https://citronreview.com/2022/03/21/unfathomable/
Cheers
P
Posted by pavle radonic at 3:05 AM No comments:

Some effort required at the burbling of the pair opposite, evidently unhappy about something or other, the older gal in particular. Poor chap on the end of their table needed to bow to it quietly, no way out for him. It was easy to understand the bigots struggling with that rhythm of speech, the altogether other music. Fausi immediately flashed to mind with his imitations from behind his counter up the road, where mornings his Viet customers predominated. During the war the Black GIs must have mastered some of the phrases just like the little trickster, and for the same skirt/sarong-chasing reason too. A young chap who rocked up to the closed market doors with his girl—one of at least half a dozen through the course of the hour—laughed at their predicament very much in the rhythms of the new, adopted country. Well established two part hee-haw that was never practised by the original boat-people. Over the other side of the street the old worn biker had arrived out front of Huong, a highly unlikely convert to vegetarianism, much less veganism. Puffing on his ciggie waiting, big draws that suggested the stick had not been picked up from the pavement, or the ashtrays along the strip. Man had only partly dismounted from his steed, peering through the window again and again. You might be pushing your luck there Buddy. Luckily the front tables were vacant, as the lady would not appreciate that mug putting off her patrons. The lady at the resto had a Buddhist nun aunt who made the spring rolls that they served in her own kitchen. Walked the proper Buddhist talk the niece.

Posted by pavle radonic at 9:53 PM No comments: